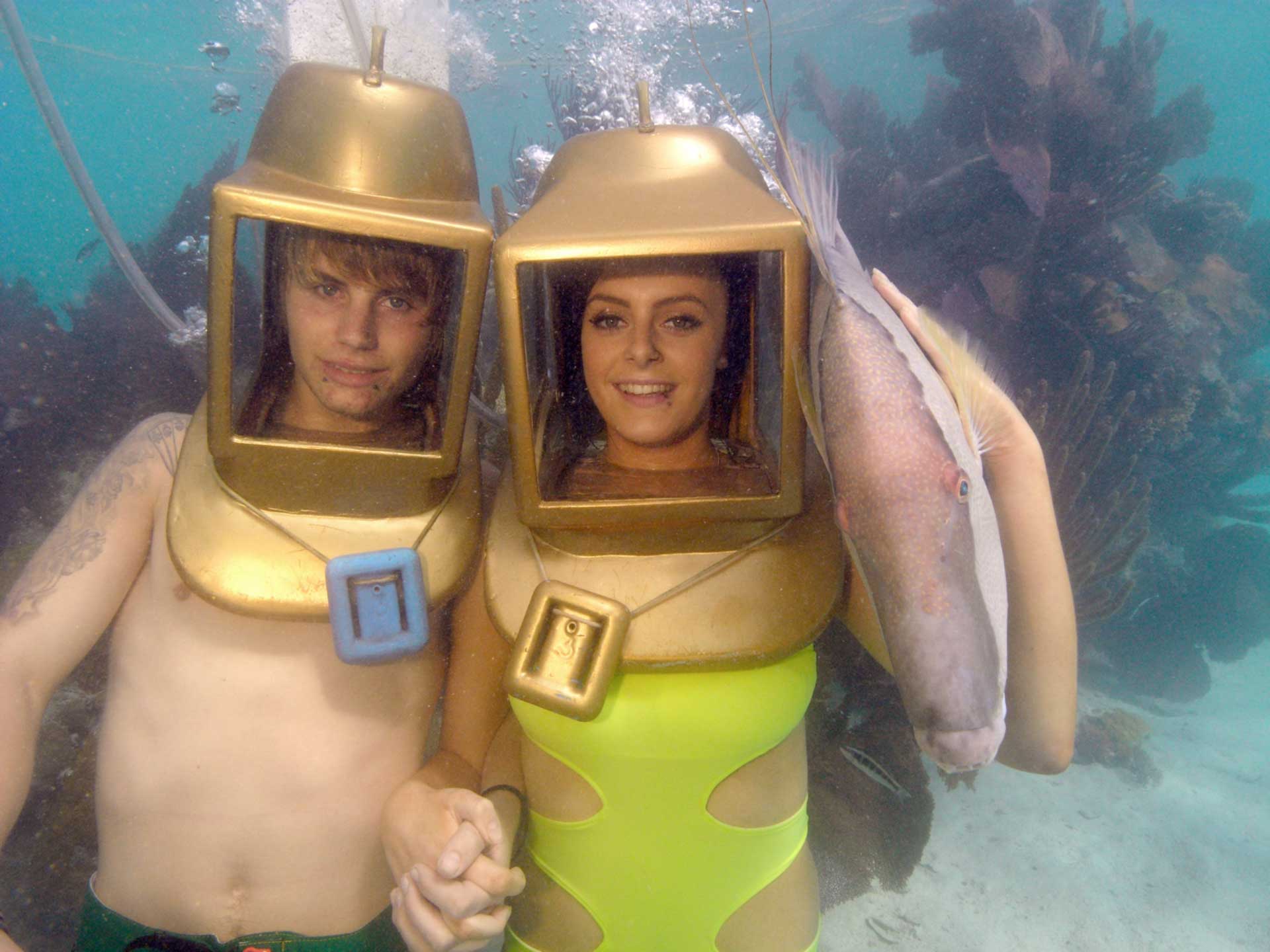 Charles submitting to being gently held between helmet and hand.

Sad news! After over nine years of friendship Charles was driven away by a four inch long remora, or shark sucker. I am hoping to make friends with a new one, but they have to swim by first. They are getting more rare as people enjoy eating them and feel they need to eat meat. Still I will leave the post below for posterity.

Fantastic news! On May 28th of 2008 we made a new friend. I know this fish was special from the first time I saw him. The way to make friends with a hogfish is to give them a mussel. This is a hard feat if you are unknown and a viewed as a threat. The way to do it is to jump so your hand is out of water. Then you can throw the mussel through the air and have it drop in front of retreating hogfish. Well! This fellow pulled a hand brake turn and just about got the mussel before it hit the bottom. The next day the routine was repeated. We then had a four day break consisting of a weekend and no booking on the Monday. On Tuesday Charles IV was eating mussels off the bottom that were simply dropped (Then one must back away respectfully and wait.) By Thursday this bold fish was eating out of my hand. (Hand resting immobile on reef). By Saturday we had achieved ‘join-up’ and our new friend was eating from my hand mid-water with very little hesitation. This amazing fish is still with us and is our star attraction. There is no other tour in the world that has a hogfish you can touch and hold. With a bit of luck he will be there on your dive!

I never would have thought it possible, but here is proof. Some hogfish are so greedy (Gastronomicaly motivated), that they will allow themselves to be held. That is right …..In park…Not moving! Within weeks this fantastic fish was allowing me to take him from person to person to be held. My cat will not even put up with that abuse. Yes, a domestic cat that would scratch you as he lept in protest from your arms. Now we have a fish, out in the wild, that will let complete strangers touch and hold him. That is right a whole row of six or seven divers, pawing, holding and groping awkwardly at this majestic fish. I can sense his resignation to this procedure, knowing there would be food given to him after the last person had touched him.
Some divers are scared and I have to just about put their hands on him for them to accept this miracle that they can hold a hogfish. Some folks casually hold him as they would mindlessly hold a drink at a party. And then there are others whose reaction of appreciation and look of amazement make me feel that this the best way for me to spend my life. Click here to see a YouTube video of me holding Charles. My brother did a great jop putting this up but the light is in the wrong place and the video quality does not do Charles justice. Remember to click ‘back’ and not get too distracted on other videos. There is another YouTube video of my brother putting Charles ‘under manners’. After looking at the two videos it will become clear that Charles knows me and is more tolerant of my handling him. My brother, being a Hartley, knows how to handle fish, but Charles is resisting his will being bent by one who has not fed him on a regular basis. It is not so much about love and trust, as it is FOOD.