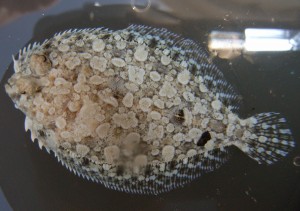 These fish are not only rare but also very hard to see.

They change the color and pattern of their skin to match the bottom underneath them. When they are very small and existing as plankton, (life forms too small to swim against the current and have to just go with the flow), their eyes are on either side like other fish. As they mature the eye moves around the body from one side to the other. By the time they have developed into a fish that no longer floats, but rather rests on the bottom, both its eyes are on one side of its body. Like the octopus they are masters at mimicking the color of their background, mostly sand and pebbles. They can also toss sand over themselves to hide, and even swim with some sand still over them.