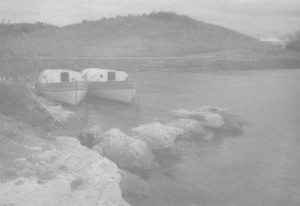 These open boats, which were meant to take the sailors from the ship to the shore for free time, were called ‘liberty launches’. They each had two massive lifting rings so they could be hauled, like life boats, into the water when the ship came into port. They had no deck to hold the hulls apart, but instead had a pair of 4’X4’s running down each hull 18 or so inches below the capping on the gunnel.