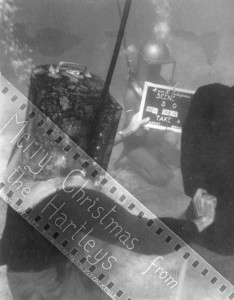 Bronson Hartley made this photo, taken by P.(Peter?) Stackpole, a Life Magazine photographer, into a Christmas card. This was the first full length movie ever taken on Kodak film. The premise of the plot is that the protagonist of the story (my mother), seeing of all the violence and competitiveness of life on the land, becomes enchanted with the beautiful and idyllic life undersea. Various scenes of beauty and harmony are shown to support this view. There was even a shot of two seahorses embracing each other, accompanied by stirring waltz music, which was deleted by the censors. The two sea horses were put in a highball glass which was stirred. and the shot filmed through it. With nothing in the glass to hang onto except themselves, they had to entwine their their tails-hence the overly suggestive embrace. In the end there were scenes of various animals fighting to support the ending conclusion that there is peace and violence both undersea, and on land.