On his first boat tour, he took five school teachers, one at a time, (as he only had two helmets), and charged them five dollars each.  There is no Sea Trek in Bermuda. Every Sea Walker or Sea Trek is a franchised copy of what originated here in Bermuda. Only the method of diving was copied and not the mindset. This was not the mind set of ‘take only photos and leave only bubbles. His free thinking mindset was to make friends with marine creatures. By feeding them, you could eventually touch them and then even get photos while holding them. Most of the species of fish we have today in our program had already been tamed and trained by my father before I was born. Now instead of Helen the angelfish, we have Diana the angelfish. Instead of Theodore the hogfish, we have Charles the hogfish. Get it…..Charles and Diana. The junior league started independently in the early 80’s back when that royal wedding took place. Our blue stripped grunt is still named George in honor of the original one.

Bronson Hartley who made his own helmet and pumps., was a protoge of Dr. William Beebe and a contemporary of Jacques Cousteau.

He operated his helmet diving business in Flatts Village at the Coral Island Hotel every summer,  and in Nassau, Bahamas every winter till 1996.  By taking thousands of ordinary visitors and locals on his undersea walks, to meet and feed the fish, he participated significantly in the development of Bermuda’s tourism.His ability to tame and train fish and other creatures in their natural environment has been acclaimed in many publications over the years.Husband, father, environmentalist, captain, inventor, war hero, photographer, fish whisperer, and diver… Bronson Hartley was truly an asset to Bermuda.Many of his adventures from his arrival in Bermuda in 1930, at age ten, till his departure from the planet in 2006 are detailed below. 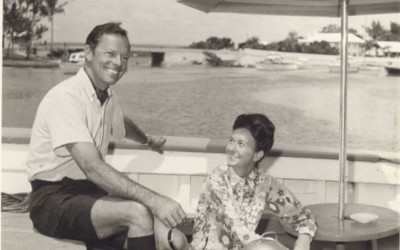 In 1964, while the parents were in Bermuda operating the summer diving, Hurricane Betsy tore thorough Hatchet Bay, Eluthera and destroyed her. Our father and stepmother then bought a 63' Huckins and life still went on. The kids each had a bunk on top of the gasoline...

END_OF_DOCUMENT_TOKEN_TO_BE_REPLACED 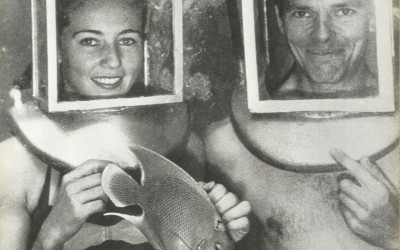 In 1947 Bronson first laid eyes on model and Cuban firecracker Martica. In those days polite gentlemen did not just walk up to a sophisticated socialite and try and 'hit' on them. The only problem is that their only mutual friend wanted this exotic beauty for himself....

END_OF_DOCUMENT_TOKEN_TO_BE_REPLACED 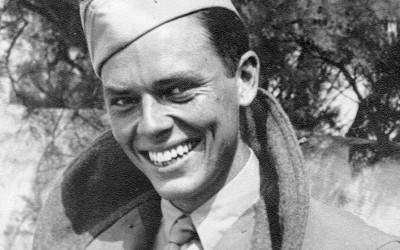 The details of life in Brooklyn are scant. His father, Dr. Frank Ende taught him much about nature. They had bees and ants in glass colonies to see the action. Frank Ende was first generation American, with both parents being born in Germany. He enlisted in the World...

END_OF_DOCUMENT_TOKEN_TO_BE_REPLACED

Before I was born, my father and his first wife, Cuban born Martica, made the first full length undersea movie ever shot on Kodak film. Bronson made his own undersea housings and acted as director and producer, with Martica as the protagonist and star. It was a...

END_OF_DOCUMENT_TOKEN_TO_BE_REPLACED 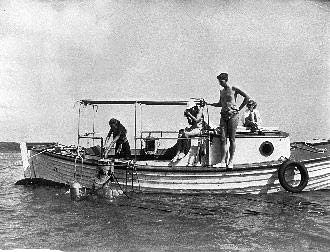 Helmet Diving on the “Ark”

After serving in the US army as captain of the air sea rescue boat, with numerous heroics, he decided to turn his hobby into his vocation. Check out his honorary mention here On his first professional diving trip in 1947, he took five schoolteachers, one at a time,...

END_OF_DOCUMENT_TOKEN_TO_BE_REPLACED 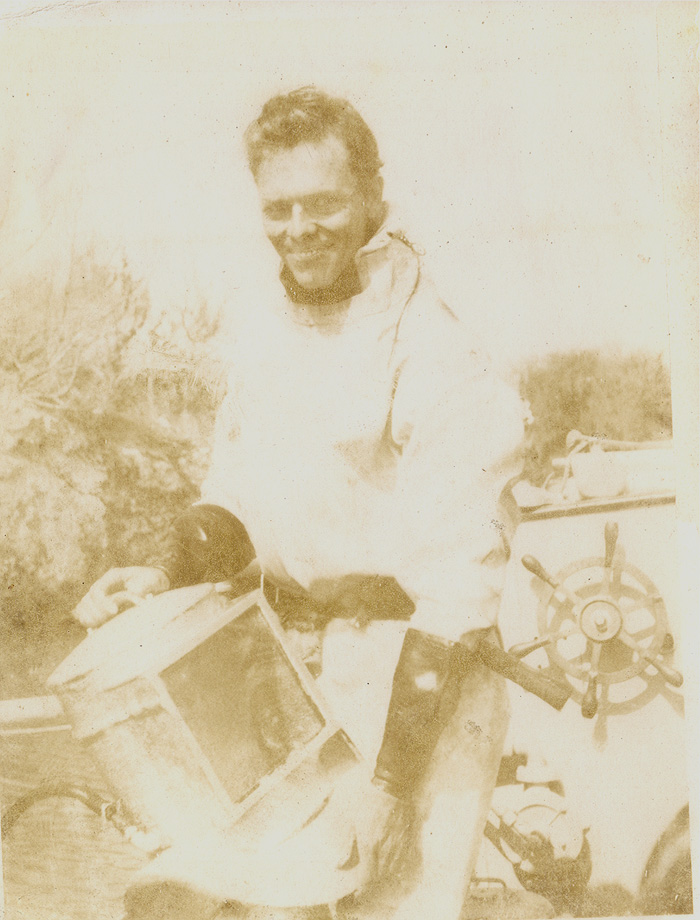 Bronson with diving helmet aboard the ‘Ark’. 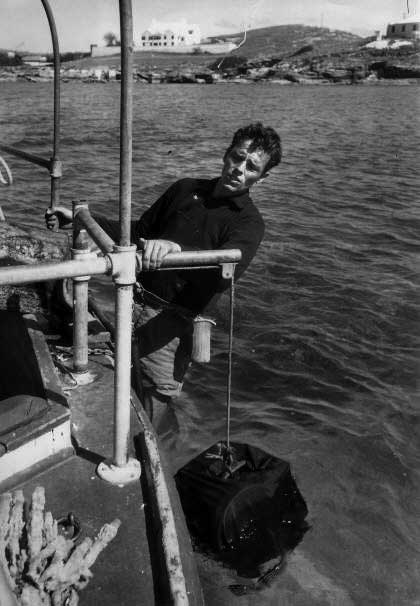 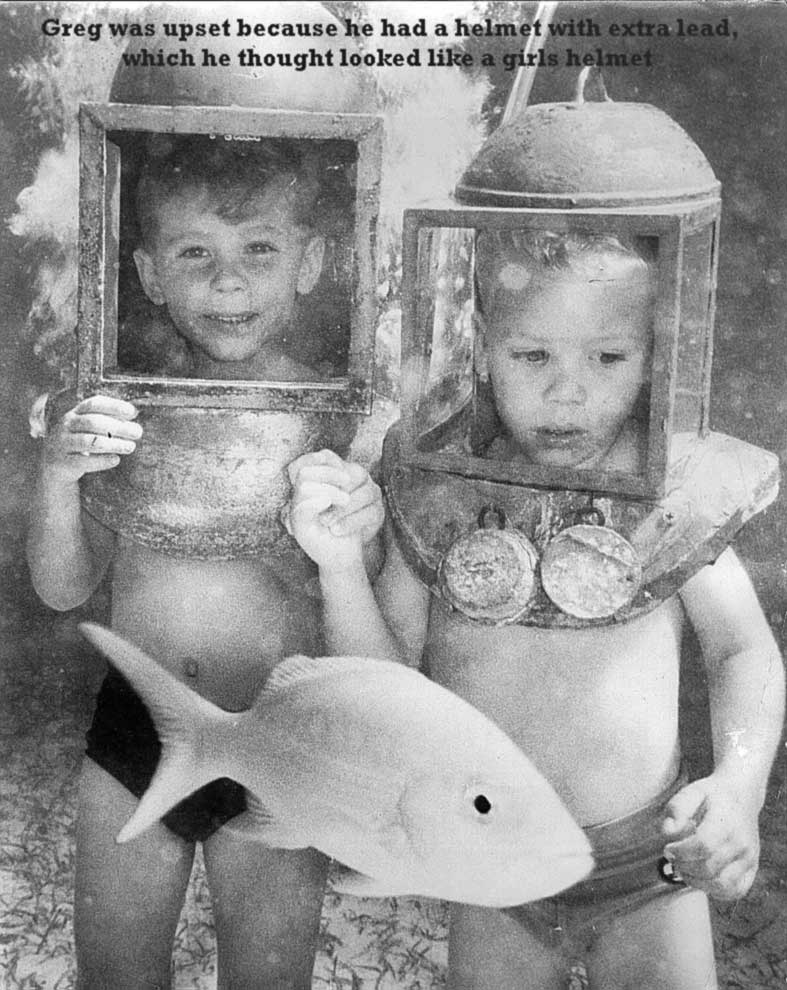 Chris and Greg diving in Nassau in 1961 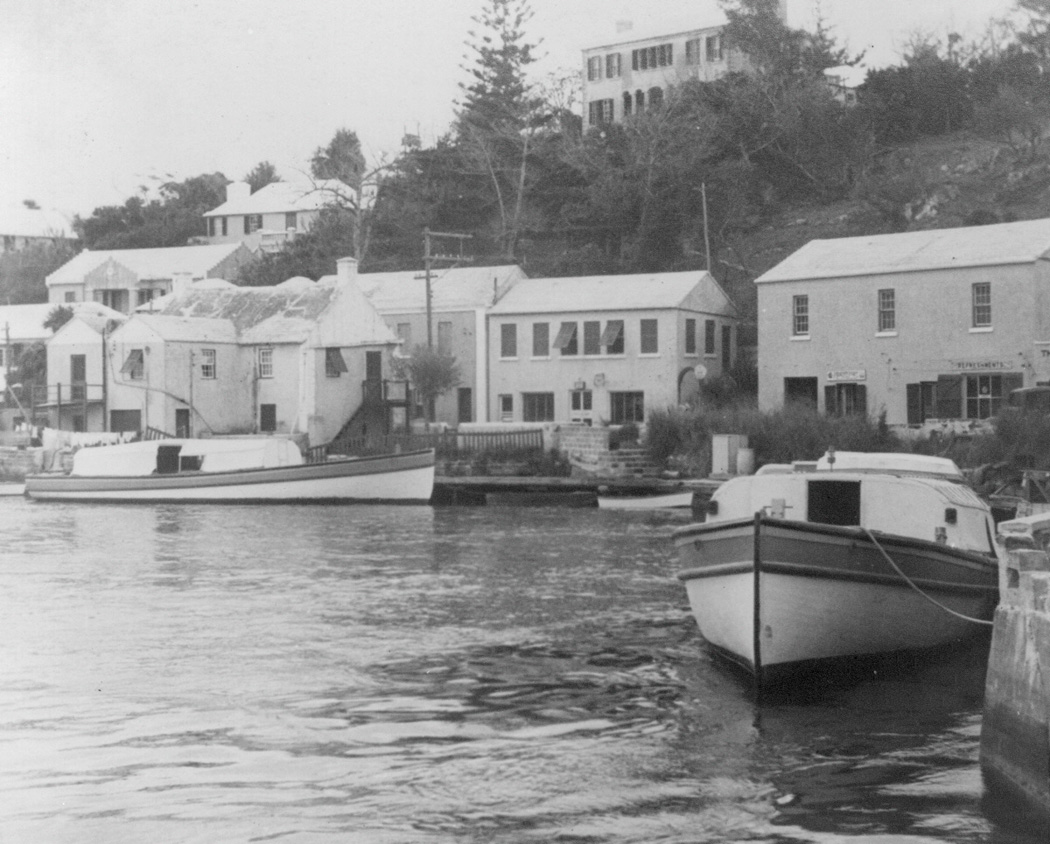 One Carioca is to the right, along side the dock of the Coral Island Hotel. The other one is at a dock later used by John Whiting. Flatts bridge is out of frame to the left. 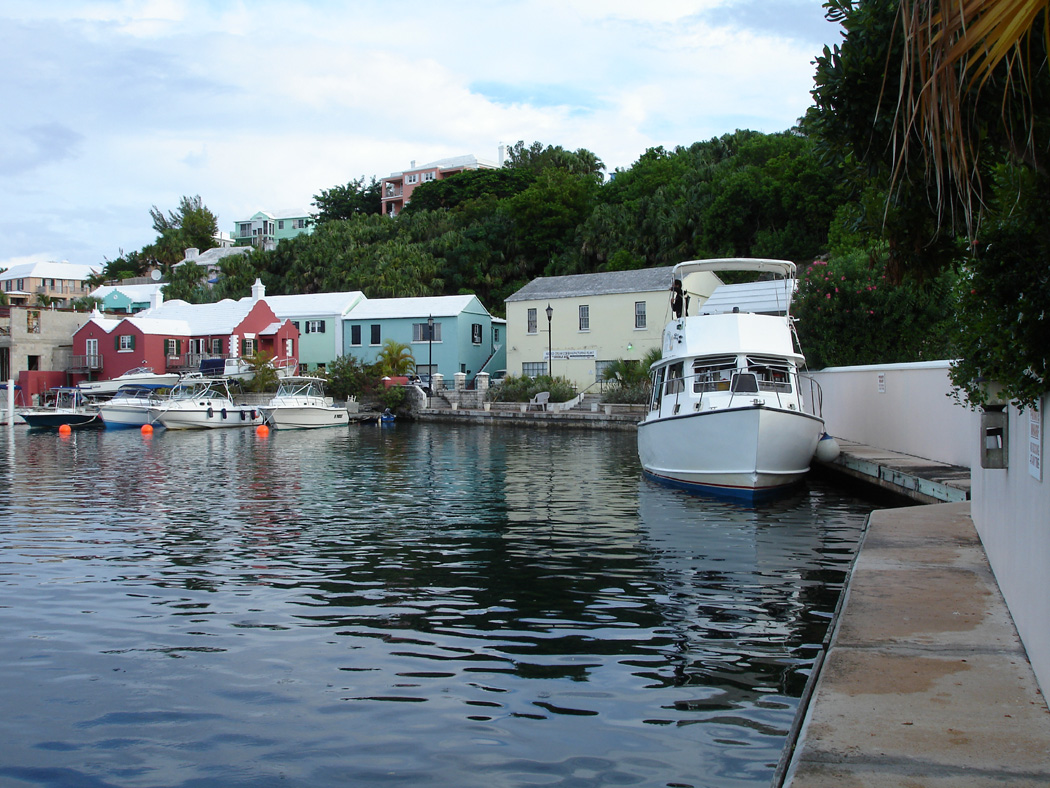 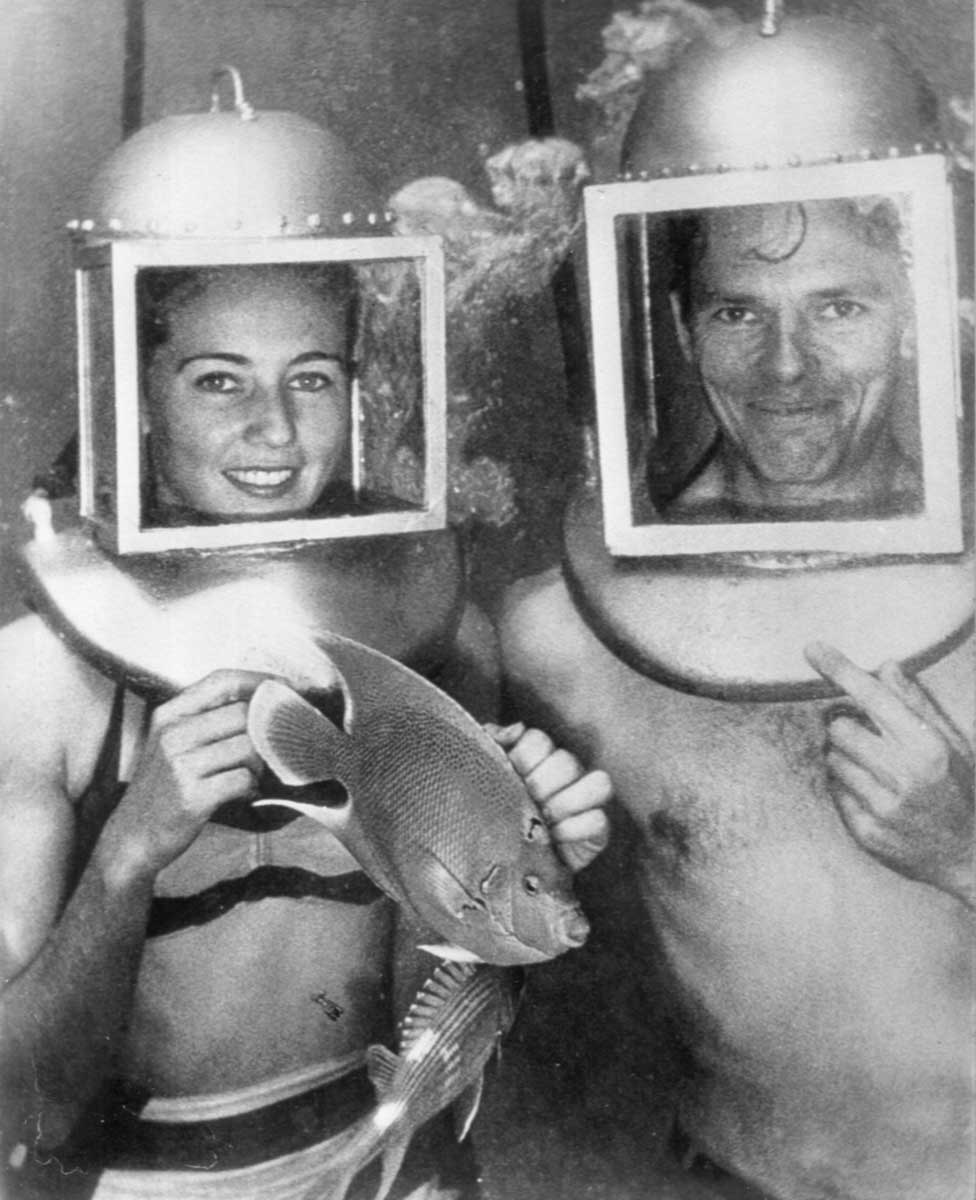 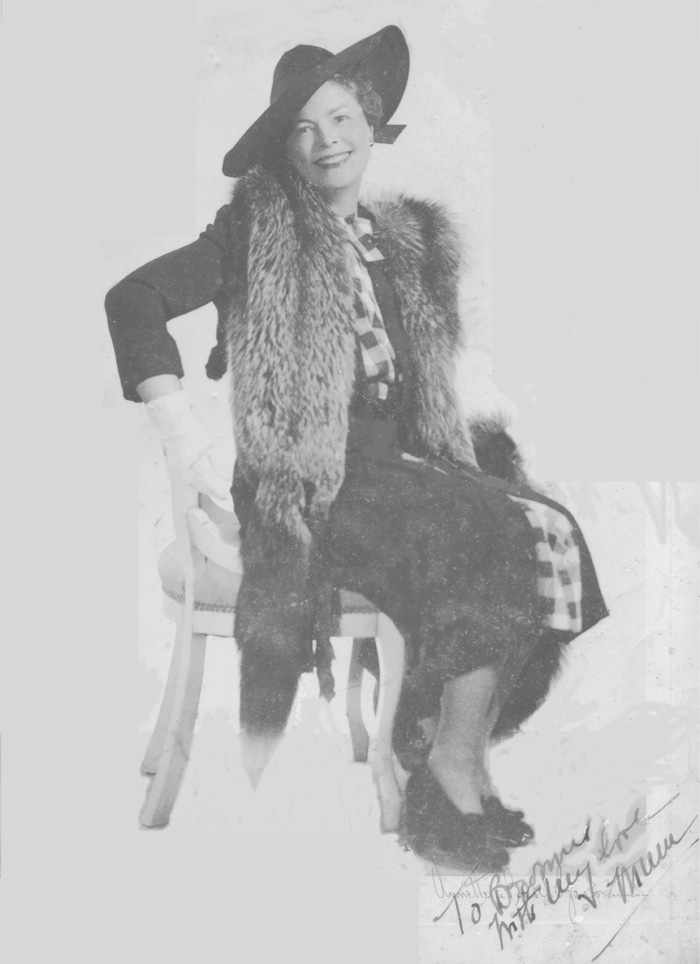 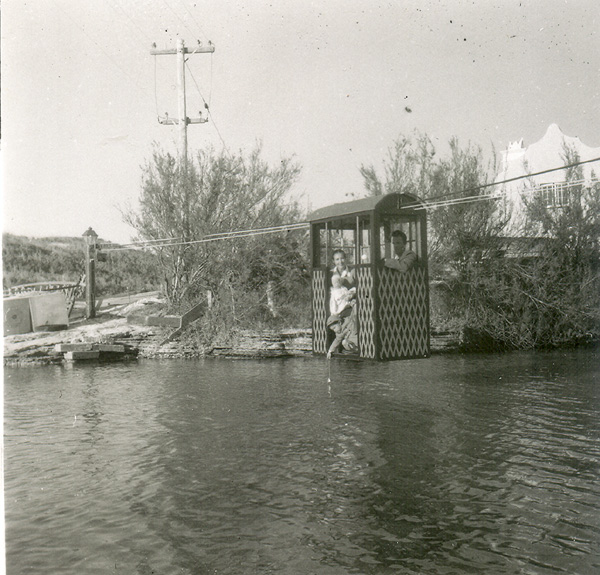 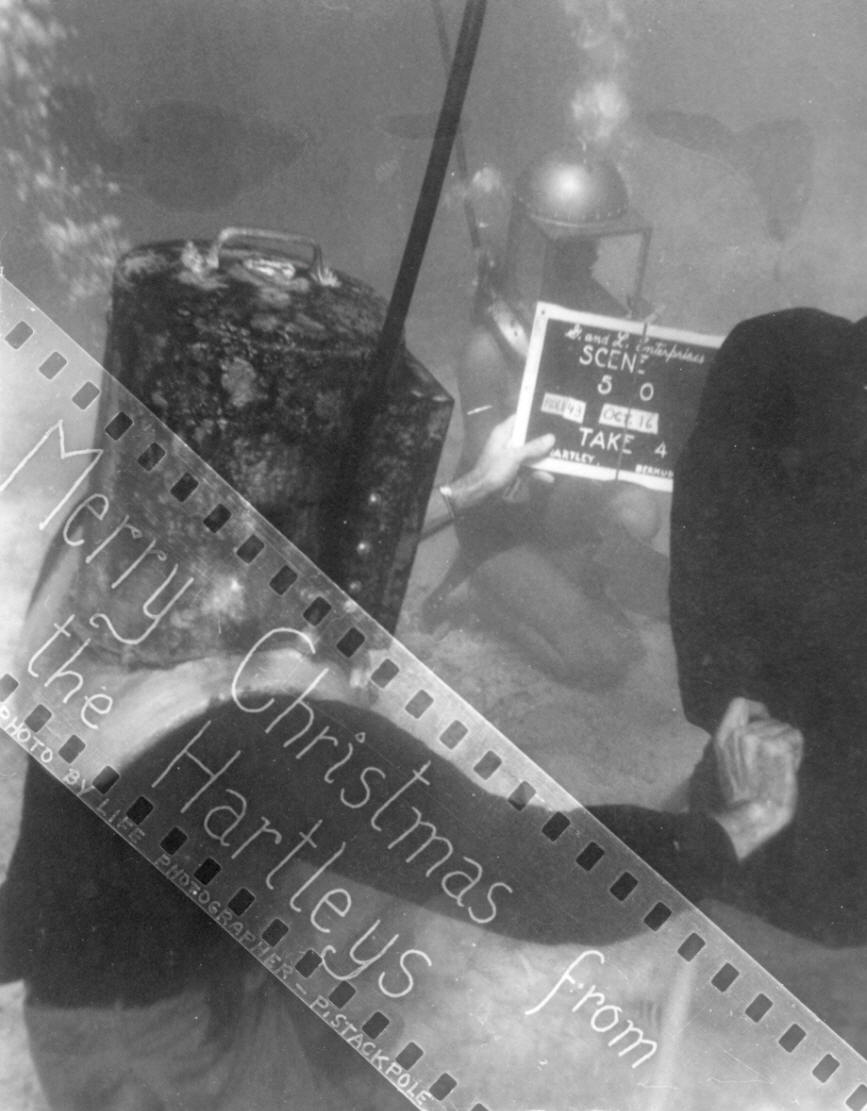 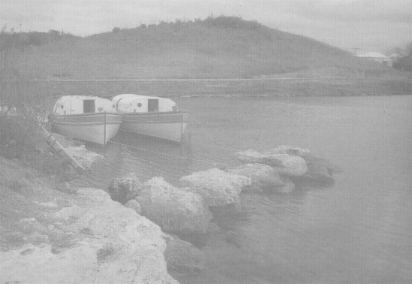 Bronson and Martica Hartley’s two WWII liberty launches, moored behind the break water on Turtle Island, which extends to the southeast towards Devil’s Hole. 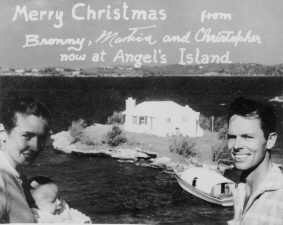 My brother, Chris at 3 1/2 months, with our home in the background, also called Turtle Island. Martica and Bronson frame the shot, with Abbot’s cliff, devoid of houses, beneath the word ‘island’. 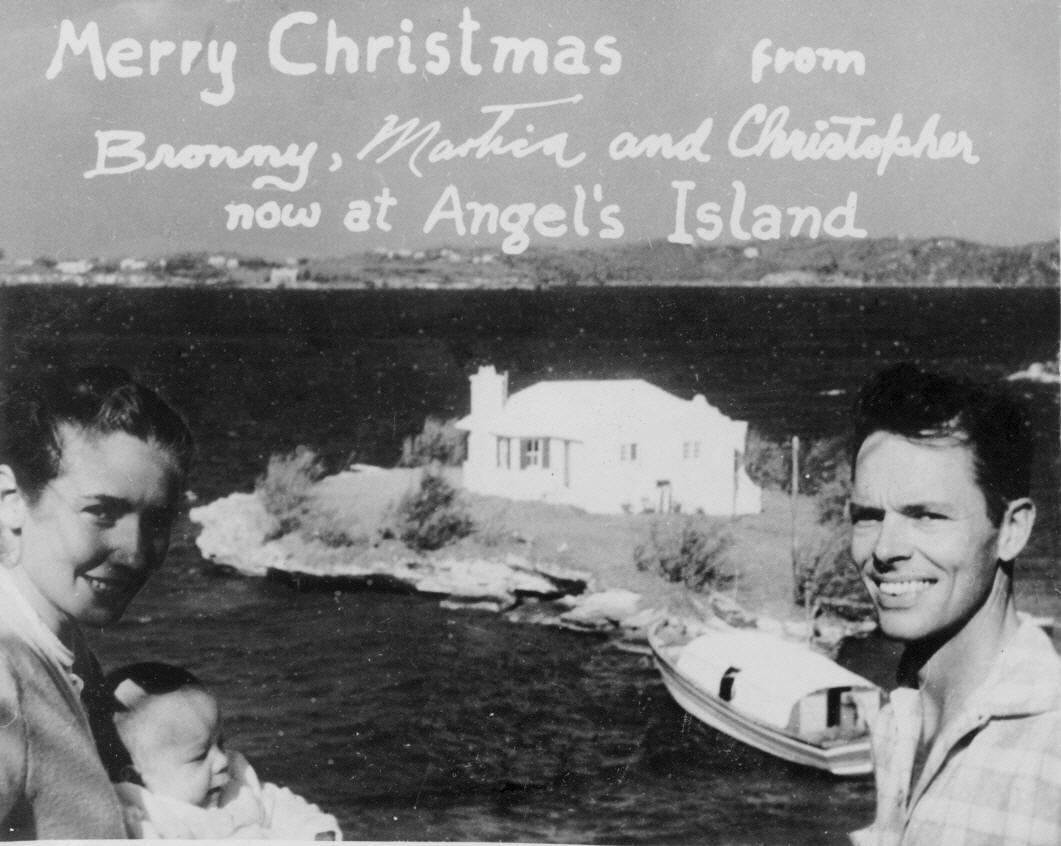 My brother, Chris at 3 1/2 months, with our home in the background, also called Turtle Island. 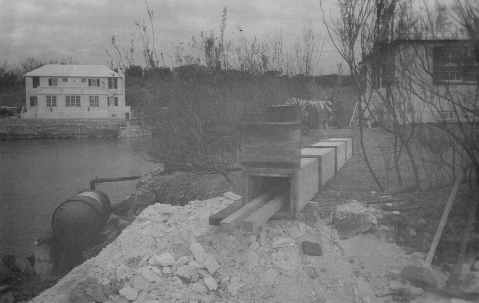 Hartley Sr. built a steam box to bend planks in adding hull, deck and cabin to liberty launch, Carioca, so she could make an ocean crossing to Nassau, Bahamas. Note black space for fire under ESSO steel drum containing water, and steam pipe to steam box. 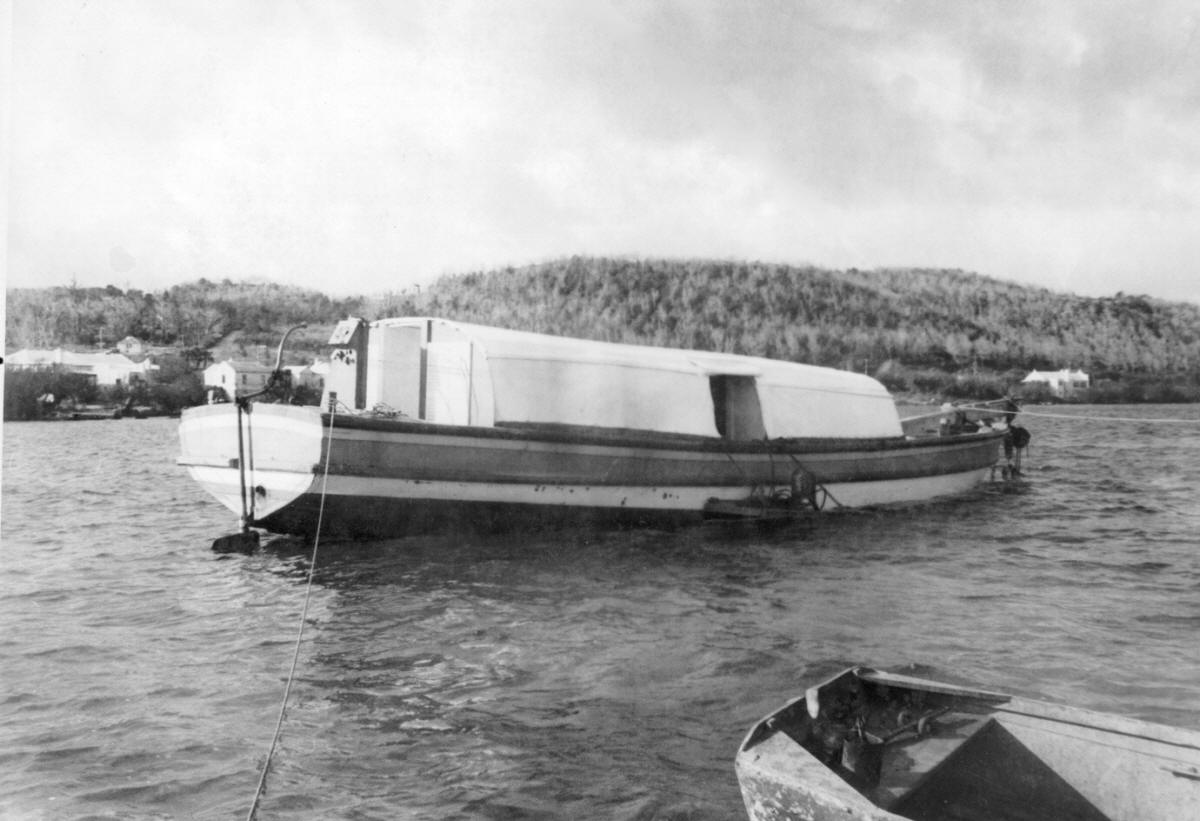 Bow of Carioca held down by heavy rocks in the making of the Turtle Island break water. 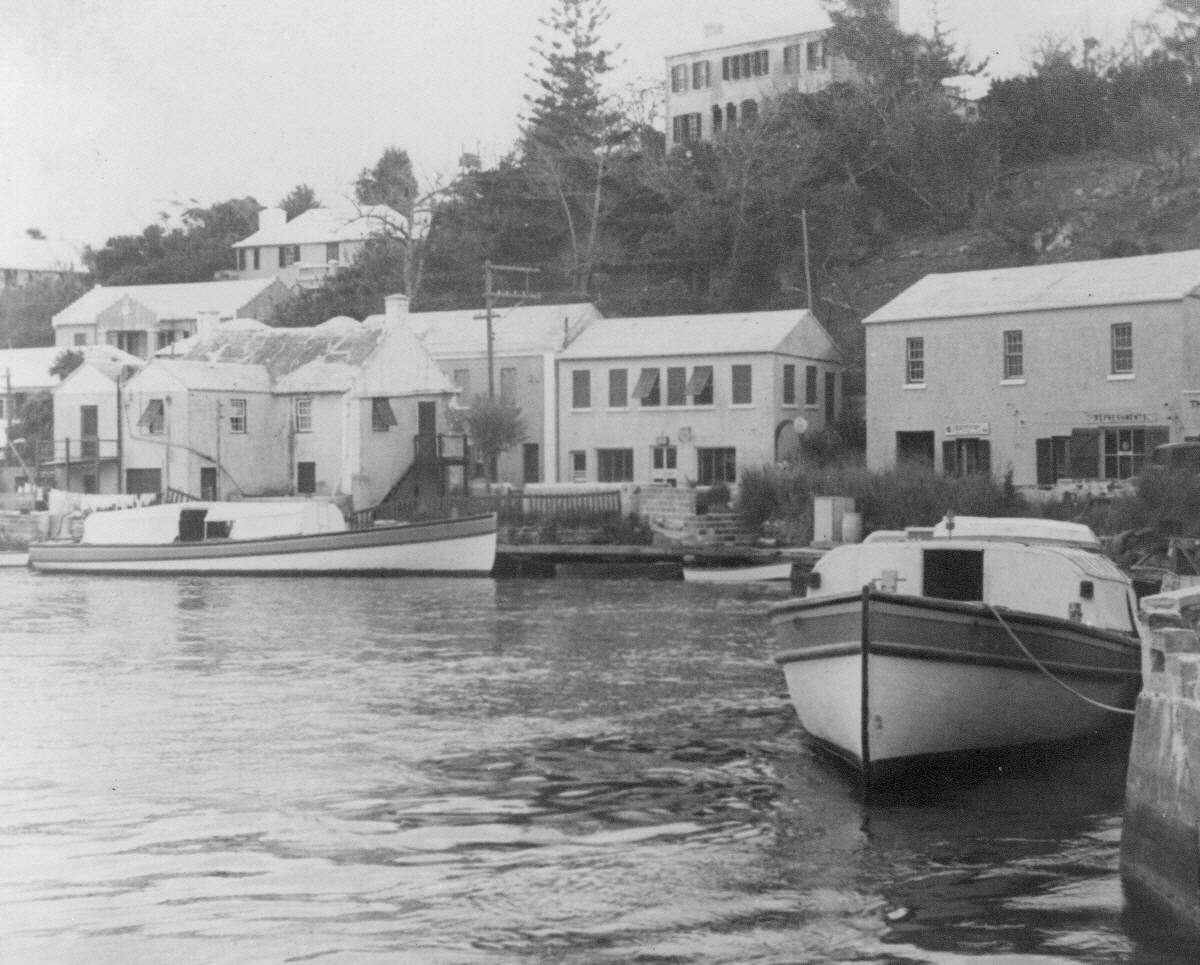 Flatts Village showing the Carioca boats tied to the dock. 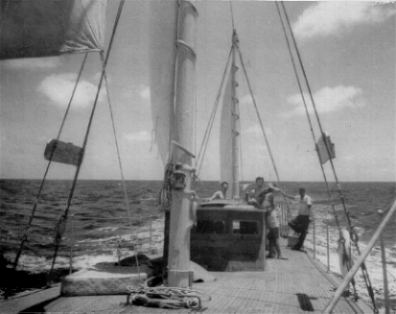 Underway to Nassau. Bronny boasted the boat could be picked up by the sturdy Bermuda cedar cabin. 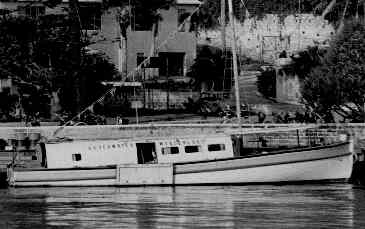 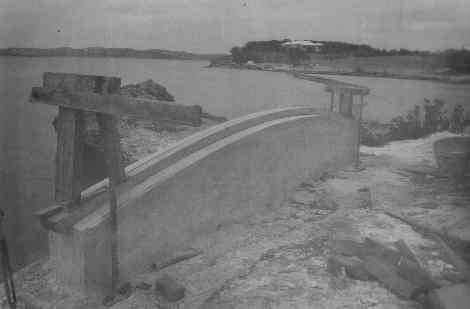 Curved wall on north side of Turtle Island used to bend planks. 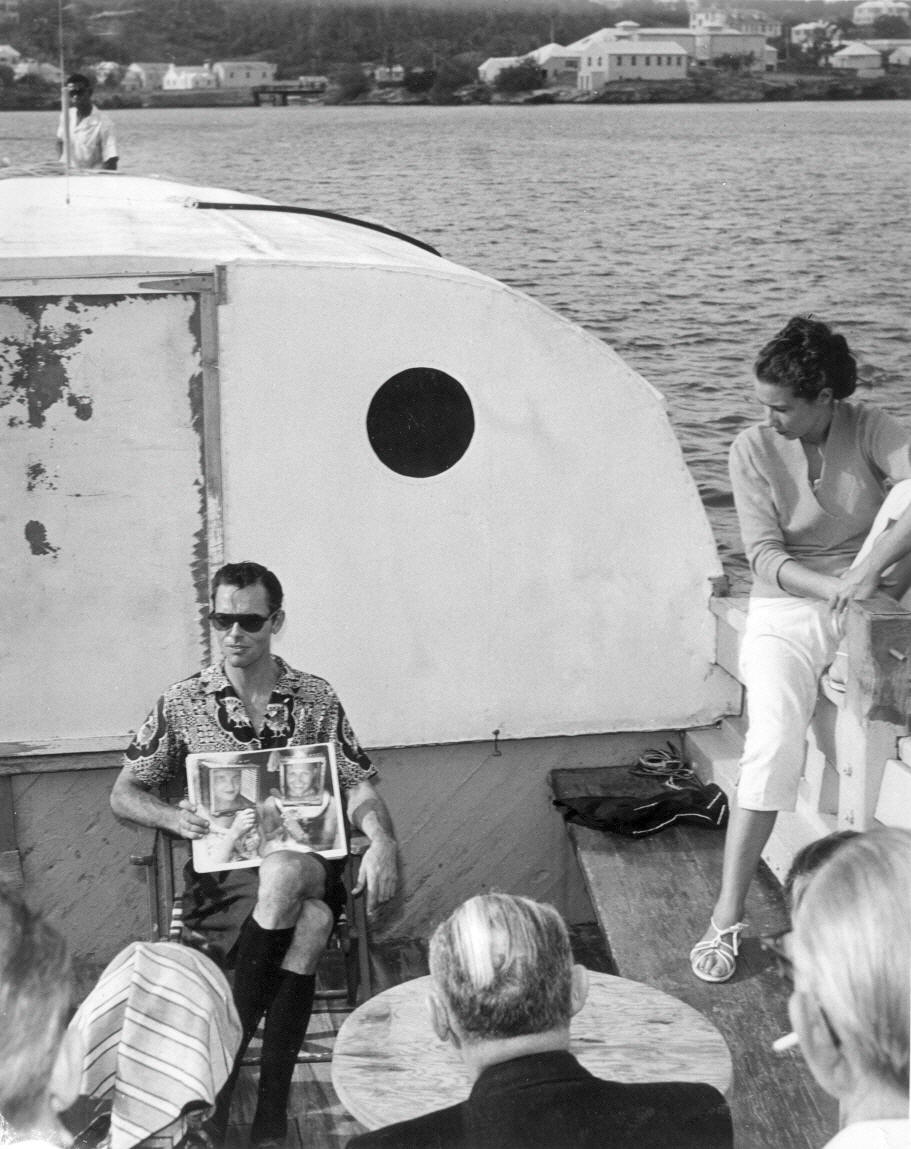 BronsonHartley conducts briefing, while his wife, Martica looks on. The aquarium is in top right background. The old Flatts bridge, with post in the center is in left background, to the left of the crew at the tiller. 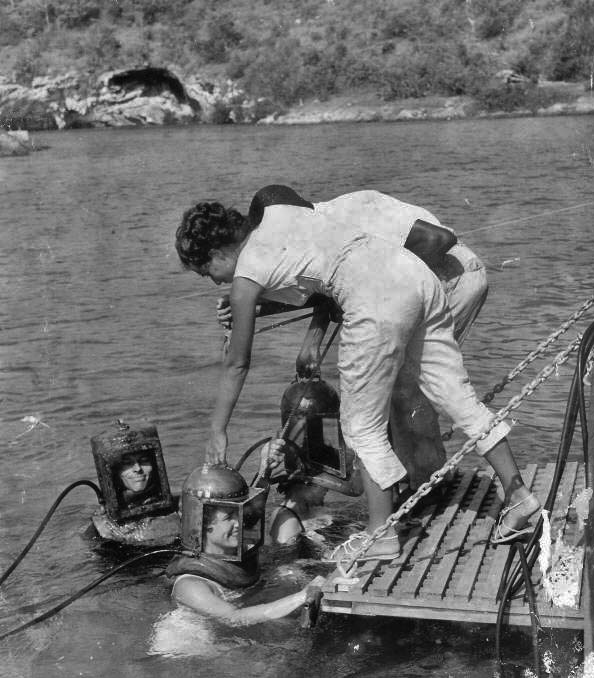 Helmet divers returning to the boat. Photo by Stackpole 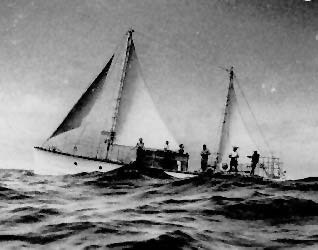 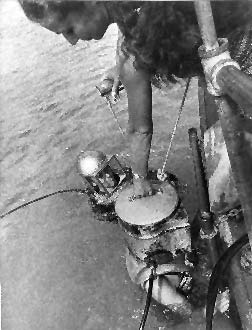 Helmet Divers in Bermuda in the early days 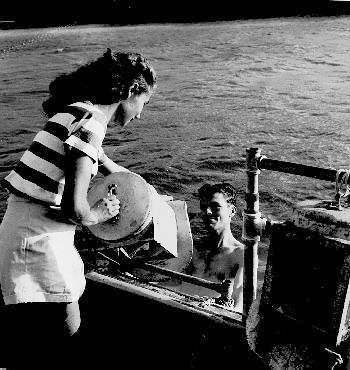 Lowering a helmet into the water 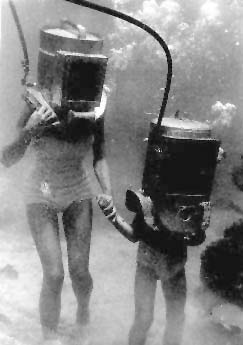 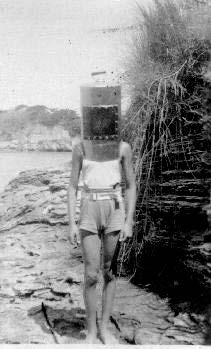